“Does the glass move or is the haptic feedback tricking my brain?”

Sometimes you have to ask dumb questions. I was 99 percent sure Audi’s updated MMI infotainment system was creating the illusion that the display moved when I pressed it. But, you have to ask questions just in case. I was informed that the glass does not move.

In addition to tricking your brain, the new infotainment system, called MMI Touch Response, has done away with the rotary dial found on the previous version; there are now two displays instead of one. The top 10.1-inch main screen handles navigation, media and most of the car’s settings and the new, smaller 8.6-inch display takes care of climate controls, text input and shortcuts. The setup is a leap forward for Audi’s in-car tech. That is, if you’re a fan of digital climate controls.

I actually liked the old rotary dial. It gave you quick access to the system without moving your hand too far from the shifter. The top of the controller also had a capacitive touchpad that let you “draw” letters. It was a huge improvement to the hunt-and-peck on-screen keyboard found in some vehicles. 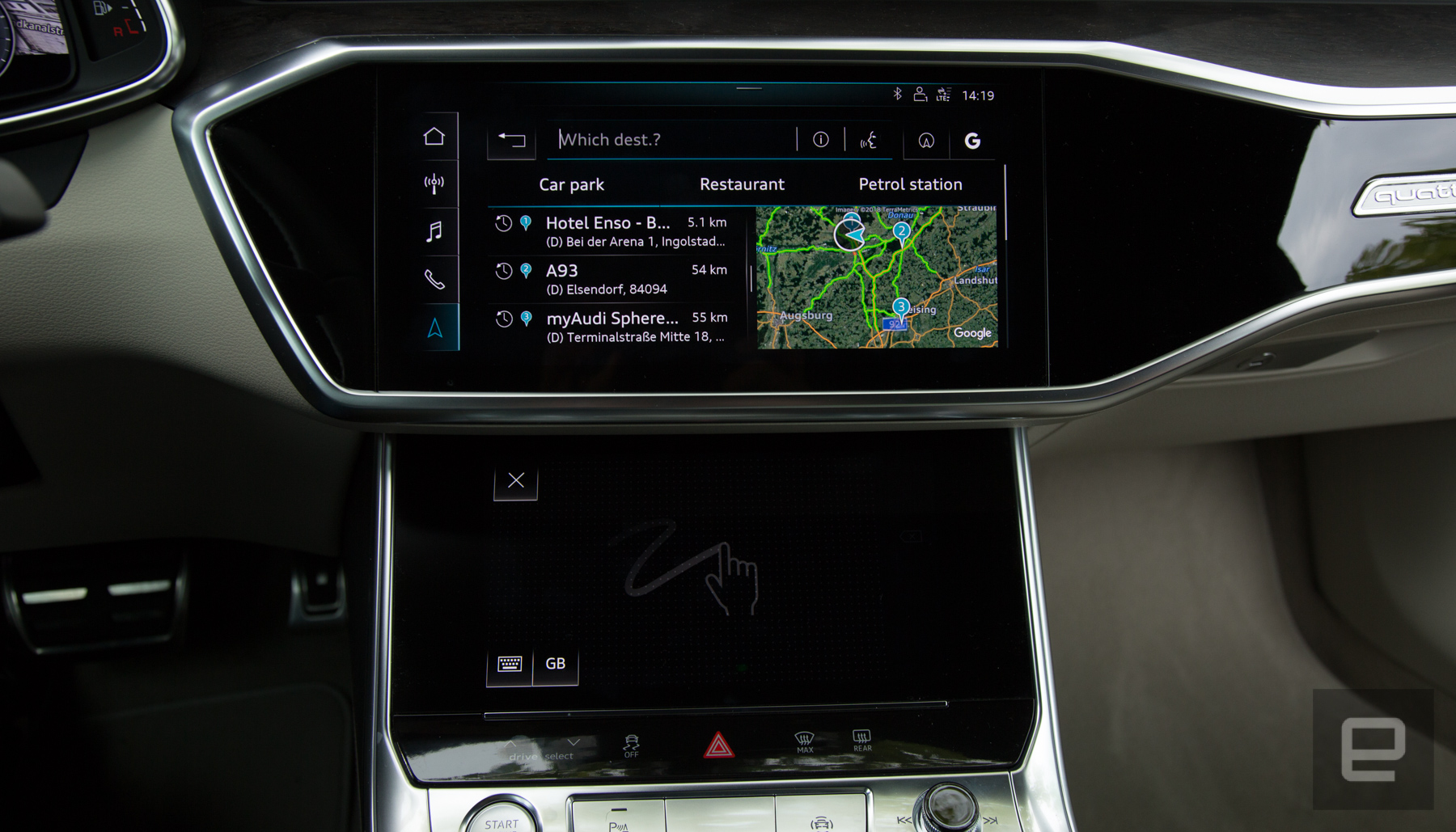 Fortunately, when you do need to input letters into the new system, the lower screen becomes a giant tablet. Even better, the new MMI lets you quickly write out the letters in sequence and it keeps up. Just write the letters over one another and you got yourself a word. I thought I’d miss the rotary controller, but after a few days, I was fine with its absence.

As noted earlier (with the dumb questions), Audi has done a commendable job on the haptic and audio feedback for their infotainment system. Initially, it took a bit to get used to the amount of pressure needed to use the touchscreen — I wasn’t tapping hard enough for the first 15 minutes. But after an hour of driving up and down the autobahn, I adjusted to the pressure requirements. It’s a bit like when everyone got excited about Apple’s Force Touch glass trackpad? Audi’s basically done that for cars.

I’m happy to say that Audi’s plan to make a flatter menu system was a success. I never felt I was more than two taps from something I would interact with while driving. It’s helpful that the automaker moved the most used items to the left-hand side of the screen: Navigation, home screen, media, phone and radio. They’re available via a single a tap that doesn’t require you to stretch to the far side of the display.

Throw very little latency into the mix and you have yourself a winner. Well, mostly a winner.

As I’ve said before, I’m not a fan of climate controls on touchscreens. I’m the type of person that constantly adjusts the temperature and fan and I like a physical control that I can reach for without looking. That’s not available in the new A7 anymore. Instead we have screens and, frankly, people like myself should get used to it, because it’s how we’re going to interact with all cars at some point. 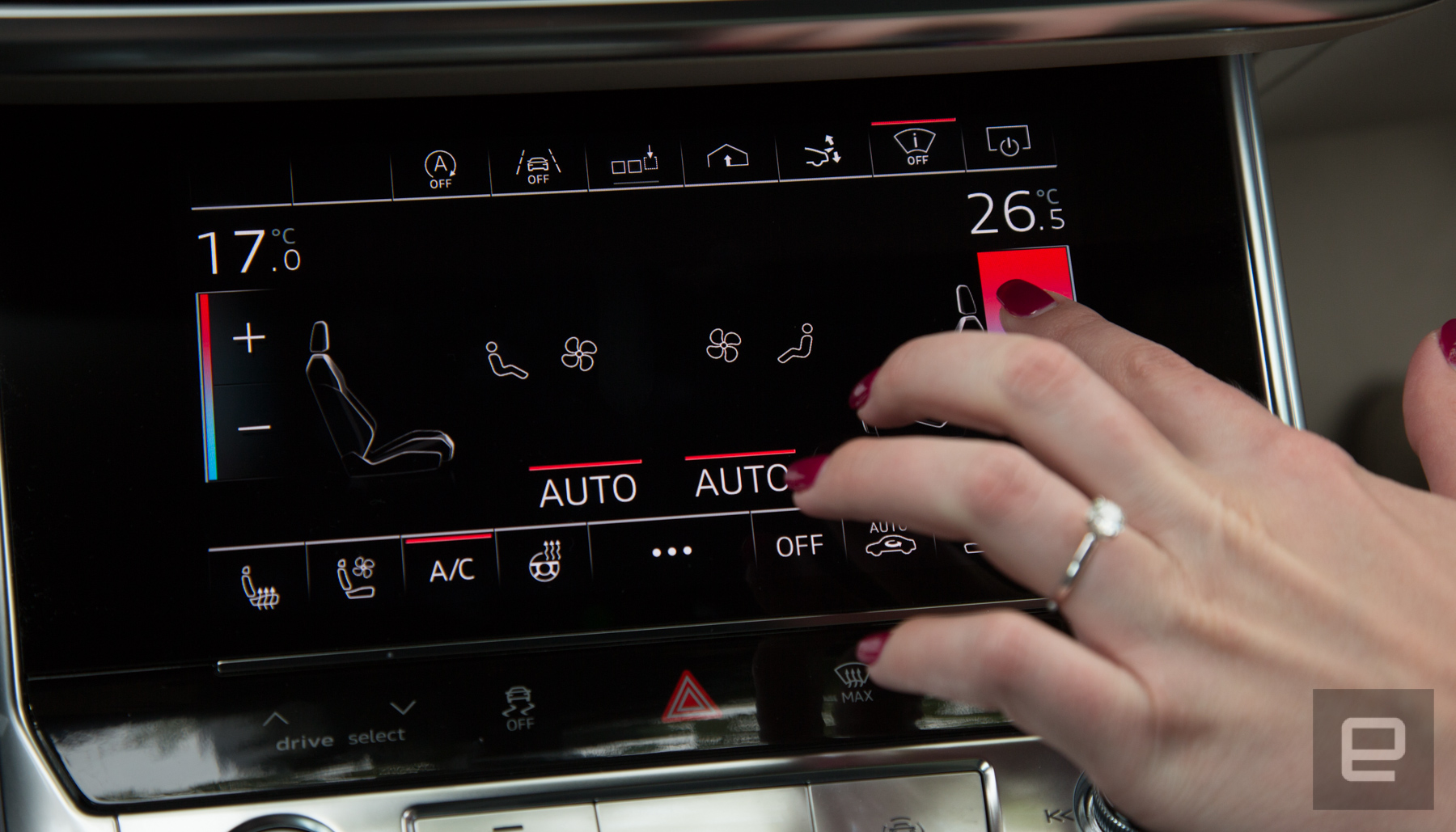 That said, plenty of people like touchscreen controls and they’ll be fans of what Audi has done. Another feature I enjoyed is that when you tap and hold on the temperature, you can then swipe up and down to adjust it. The Velar has the same feature and its slick while also being useful.

There’s a plethora of other updates and new features. Voice control now supports natural language and can find places (like Starbucks) along your route. The climate control display also doubles as a shortcut area for places, people, media and other items you use a lot.

It’s a smart update and further evidence that automakers are serious about taking control of the in-car experience. While Apple and Google are making incremental updates to CarPlay and Android Auto, automakers are investing heavily in trying to surpass those systems. 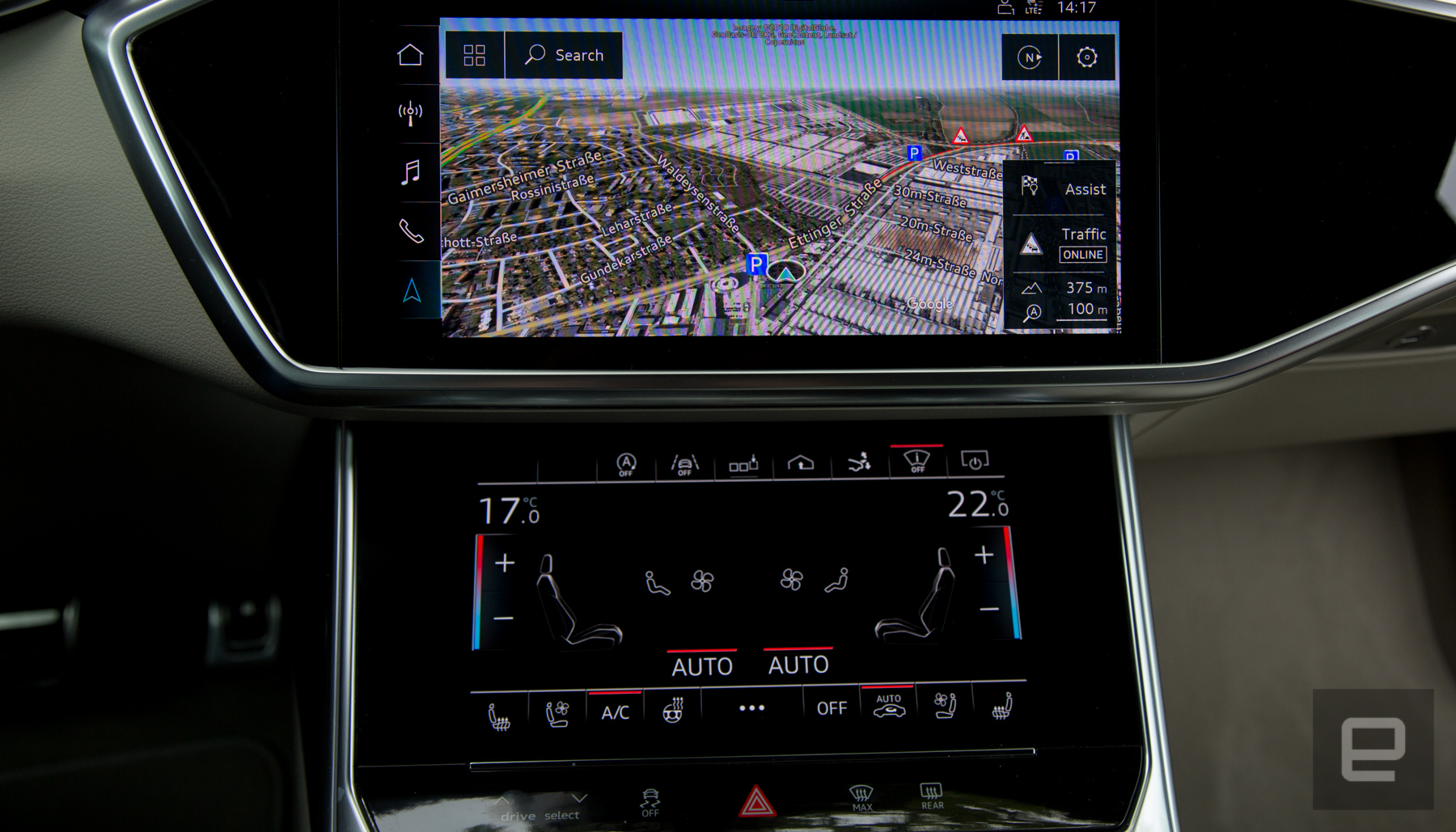 Not only is this important for how we drive now, but it’s paramount for the future where we’re relegated to being passengers in self-driving taxis or our own autonomous vehicles. Those robot cars are a ways off, but it’s important to lay the foundation now. Audi is joining a host of other automakers planning for the future because eventually, what’s in the dash will be more important than what’s under the hood.